Today was Sleepydog’s annual visit to the vet for her checkup and shots.

When I made the appointment last week, I didn’t give much thought to the timing. It was only last night when I was thinking about what Juniordwarf and I would do today that it occurred to me that I wouldn’t have Slabs’ ute today, like I usually do on a Tuesday, because he was taking it to work. (There is a long story as to why this had to happen, but the upshot is, there was no way I could have the ute today.)

Ever since Juniordwarf arrived on the scene, Sleepydog has only ever travelled in the ute. I used to take her in the car sometimes before, but even so, mostly she’s always been a ‘back of the ute’ dog.

So she had never travelled in the car with Juniordwarf, and as she’s a fairly hyped up dog a lot of the time, I wasn’t sure this was going to be a good idea.

Why not put her in the back, some suggested. OK, that’s worth a try, if she fits (I’ve never put her in there before, and the back doesn’t have a lot of room) – and more to the point, if she stays there.

My plan of attack was (1) strap Juniordwarf in his seat, (2) load Sleepydog into the car and (3) go. It started out fine. Here she is in the back. A tight fit, but she did fit (it’s not easy to take photos in the car with a phone camera). 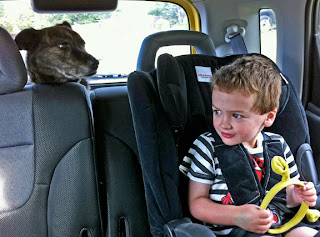 However, before we even started moving, she’d made her way over the back seats and into the actual car. 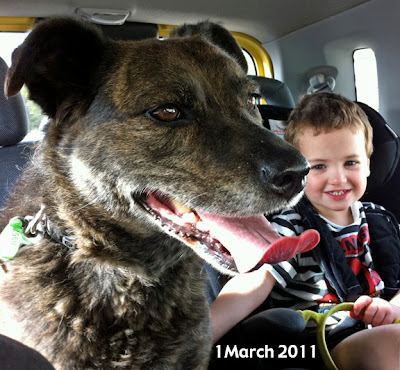 Juniordwarf thought the whole thing was hilarious. Sleepydog didn’t sit still the whole trip. Fortunately it was a short trip.

It would have been a lot easier if I could have strapped her in too, but we tried that one time and she ended up tangling herself up in the harness to the point where it was useless.

So today’s lesson: Sleepydog is, and always will be, a ute dog.

Incidentally, this got me thinking as to whether driving a vehicle with an unrestrained animal  is legal (after all I don’t want to be going online confessing to have broken the law . . .), as heaps of people do it. I think it was raised in NSW by the NRMA when we were living there.

I looked at the Road Rules and the only thing I could find specifically about animals travelling in vehicles was Rule 297 (1A) (which is actually about the driver being in control of the vehicle, not about animals at all). Rule 297(1A) says:

A person must not drive a vehicle if a person or an animal is in the driver’s lap.

So now you know.