Several months ago, I signed Juniordrawf up to the Yates Junior Landcare Sunflower Challenge.

The idea was for the kids to plant some sunflower seeds, that were provided free (yay), grow and maintain their sunflowers and, once the plants were fully grown, submit photos of their tallest sunflower and largest flower head. They had to get photos taken of them with a measuring tape alongside the plant to show how big it was. There was also a category for the most creative photograph .

When we signed up we downloaded a project kit that gave tips on growing sunflowers.

So in spring, once we’d got the seeds, I dutifully cleared a patch of ground in our vege garden for Juniordwarf to plant his seeds. Only he wasn’t in the slightest bit interested. So I thought I might as well put some seeds in, because I really love sunflowers and they look great in the garden. They germinated, only to be destroyed by, I assume, snails.

So I cleared another patch, this time outside the vege garden fence so we could easily access it and tend to the plants. They grew too, and two survived.

I was quite surprised to find that one of the plants I thought had been destroyed by snails had actually survived, and it grew to about 130 cm. This compares to the winning plant (as at 25 February 2011) of 270 cm.

Yep, we grow good sunflowers! Perhaps we should have followed the instructions a bit more closely. For example, feeding it with a liquid plant food every two weeks, keeping it well watered and mulched.

The other two that actually survived were even less successful (size-wise). 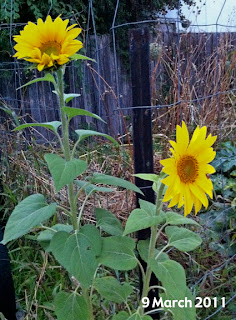 The one on the right opened a couple of days ago and the one on the left opened today. Long after the 25 February deadline. The taller of the two is a tad over a metre high, and the bigger flower isn’t quite 15 centimetres. (Just for reference, the winning sunflower was 46 cm wide.)

Even thought they aren’t very big, they are very pretty and I love how bright they are. I love taking pictures of them, especially closeups.

Here’s one I took two days ago when the flower opened (you saw it yesterday as well – this is the whole picture though). 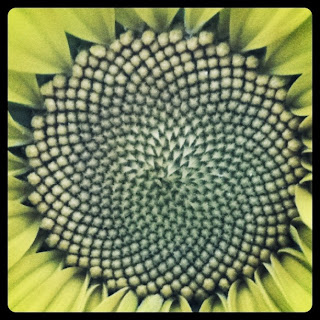