School dropoffs are still a little traumatic. Juniordwarf is quite insistent that he doesn’t like school, he doesn’t want to go and he wants to go home – or to work with me. He isn’t convinced that my work is pretty boring and he’d have a much better time at school. I think I’d have a better time at school than I do at work some days, but that’s another story.

Unfortunately, there are still tears at dropoff time, but he seems to be getting better. And I am too. I’m now able to get out of there without having to slip on the sunnies so no one can see me cry, which is what last week was like. It has been really distressing to have to leave him in such a state, but I’m getting better at dealing with it.

Pick up at 3 o’clock is another matter entirely. It’s fantastic to arrive at school, wait for the bell and see all those adorable little faces crowding at the door looking for their mum, dad, grandma or whoever comes to get them. It’s especially delightful when they’ve done something at school that they’re hanging onto or wearing.

A couple of weeks ago they were all standing in the door clutching their biscuits that they’d decorated, wrapped in paper serviettes. Last week the had crowns on their heads. Today they were all wearing pirate hats, with their own hand written names on them.  So he was ‘Pirate Juniordwarf’. See, that would have been much more fun than researching 43 year old regulations. 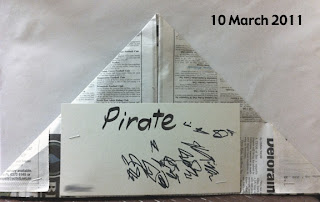 Some of the kids had done a pretty good job of writing their names. Juniordwarf is still mastering the basics of holding his pen correctly, and his drawings of objects still look very much like scribble, but he’s also started to make marks on the page that look like the beginnings of writing.

It’s really exciting to see him learn this stuff!

Since he started school four weeks ago he’s started trying to hold a pen properly, is picking out letters in the titles of books and is using his toy clock to show the time (3 o’clock features prominently in this activity). He seems to be talking a lot more and he acts out things that have happened at school during the day. He packs his lunch bag each morning and puts that into his school bag. (He struggles getting the zip done up because it’s a bit difficult to align sometimes, so he sits there muttering ‘stupid little bag’.)

Today one of his school friends asked him back to her house after school, and he had a wonderful time. I’m really hoping that having spent time with R this afternoon will result in him looking forward to seeing her at school tomorrow and that he will be, well, if not keen, at least not unwilling to go so he can see her again.

We live in hope!