Regular visitors to pastpresentfuture might remember my post about the jungle down the side of Slabs’ shed.

To recap, our back yard has a fenced off section behind Slabs’ home brew shed that is ‘mine’. I have my own tin shed, a sort of paved area out the front and a small garden space at the back between the shed and the neighbour’s back fence. 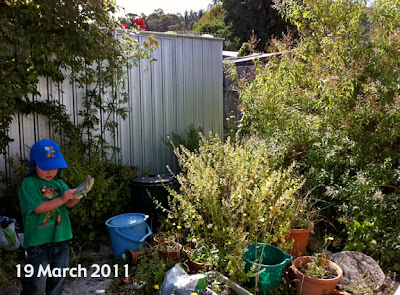 What you can see is: my shed, Juniordwarf standing in front of what was supposed to be the container mint garden, but has been taken over by the lemon balm. 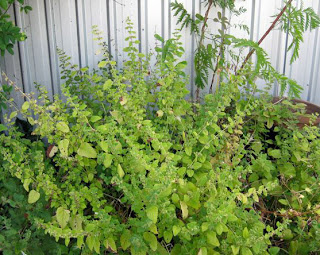 Lemon balm is also the plant you see in amongst the pots and the green bucket.
A rather large lemon verbena plant to the right. It has taken over what was the ‘culinary’ herb garden and is huge. I keep expecting it to die completely in the winter, because I thought it wasn’t frost tolerant, but it has just gotten bigger and bigger. It has the most glorious lemon smell. 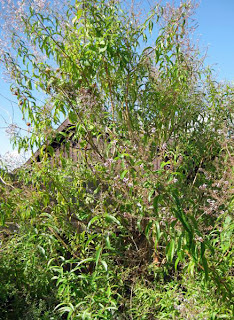 Unfortunately it has started to be taken over by this insidious creeping vine thing, that I believe is called ‘morning glory’. It sends out runners underground, crops up everywhere and twists around plants that it climbs up, strangling the life out of them. 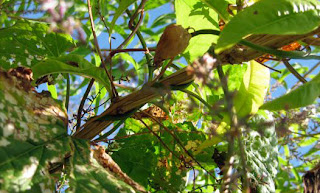 Ugly, horrible stuff. It’s everywhere around here.
Moving right along, as I said before, the gap between the shed and the fence was to be lined with thyme. I used to call it the ‘thyme line’, and I originally planted several different varieties along the fence, about five or six years ago. 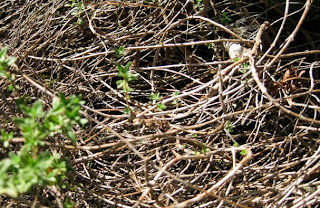 Only the original thyme has survived, but it’s gotten very old and woody now, with new bits sprouting out here and there.
The other side of the thyme line (the shed side) was supposed to be a chamomile lawn, with some honeysuckle climbing over the shed. The chamomile has gone and the honeysuckle has become a ground creeper.
Another part of the plan was a climbing ‘Black Boy’ rose to be planted at the back of the shed and intended to climb over the shed’s roof. Unfortunately I had no idea about how one would get a climbing rose to climb a tin shed and everything I tried failed.
Then the garden got somewhat neglected due to other priorities (aka Juniordwarf) and the rose went in completely wrong direction, away from the shed and over the neighbour’s fence. 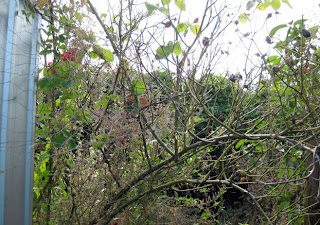 So my first task, after hacking my way through what had been the thyme line, was to try (again) to train the Black Boy over the shed. 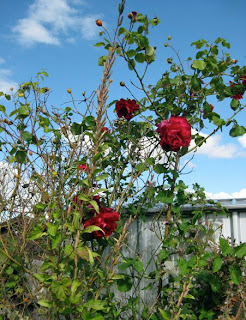 It required considerable effort, and there is some more fixing work to be done, but at least I could get into what was supposed to be my relaxation garden.
I expected it to be overgrown, but was shattered to find that the whole area had been overtaken by stickyweed, which had died. So there was just masses and masses of this dead brown sticky, seedy evil plant. 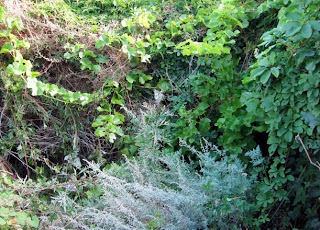 As I started to pull it out, I got more and more covered in the foul little seeds to the extent that I decided I had to keep going and get it all out, so I’d only had to de-seed my clothes once. 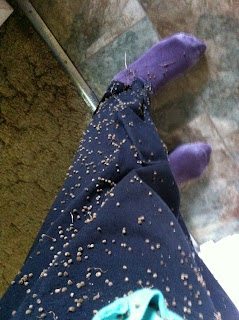 This is what my clothes looked like at the end of the session: 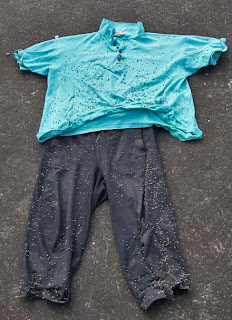 The seeds were everywhere: in my hair, my hat, all over my clothes, underneath my clothes, in my shoes . . .  it was gross. And my arms looked like this. 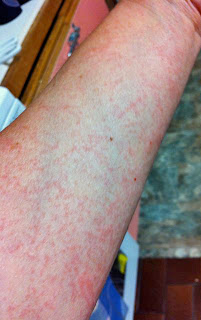 But even though it really hurts and I don’t know how I’m going to get my clothes clean, I keep reminding myself that it’s all gone, so next time I’m in there I can get to the real job of pruning everything back, pulling out old plants and putting in new ones if I have to.
I want to reclaim my space. I started it almost six years ago and now I want to finish it.
Oh and as a total distraction, I spend a few minutes watching this little guy. 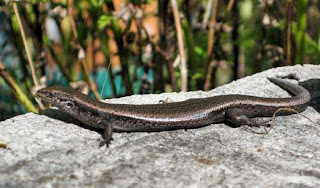 I’ve never watched one closely before, and found it quite fascinating to watch him breathe and see how alert he was, how bright his eyes were, and how at one point he had both his front and back legs pointing backwards, instead of actually standing on them.
It was a very relaxing break in the middle of a hard afternoon’s work.
Share this