Skip to content
I thought it would be fun to go to the Dinosaur Petting Zoo today. It’s part of the Ten Days on the Island arts festival, which is held every two years in Tasmania.
I thought Juniordwarf would love the opportunity to get up close and personal with some dinosaurs, even if they weren’t ‘real’ dinosaurs. When I asked him during the week, he said that no he didn’t want to go and see the dinosaurs.
Well, thought I, he doesn’t really mean it, and once he gets there and sees them, he’ll have a great time. I’m sure he’ll enjoy it. What kid doesn’t like dinosaurs?
Besides, I wanted to see them too. It sounded like fun.
My mum went to the first show last night and she had a great time, and said all the kids loved it. So we were confident Juniordwarf would too, even though he said a couple of times he didn’t want to go.
(I think you can see where this is going and why I’ve said I learned something today . . .)
We got there early, since Mum said there had been heaps of people there last night and it might be hard to be able to see if we weren’t near the front. When we got there, kids were running round in the ‘stage’ area, throwing hay around and Juniordwarf had a look around, but he wasn’t that interested.
The show was on at 12.30, and Juniorwarf was hungry, so we went to get some food. Lesson 1: Take food and have an early lunch.
Mum and I convinced him to move closer to where the show was going to be, and he went into the sitting area, while we stood just behind him. It was going to be a pretty good place to be, with a good view, until Juniordwarf decided he didn’t want to stay in there any more and made a quick exit to sit down on the grass behind everyone to finish his lunch.
There was no way we were getting our spot back, even with Mum still in the throng. I managed to squeeze Juniordwarf back in to stand with her, while I stood at the back leaning on a lamp-post, unable to see a thing, sulking that I’d come all this way and I couldn’t see anything, and he wasn’t interested. I could hear what was going on and it sounded great, which made me even more pissed off that I was missing it.
My photo of the day was going to be Juniordwarf patting a dinosaur, or something from the show. Instead, all I have is a picture from the back. This was my view: 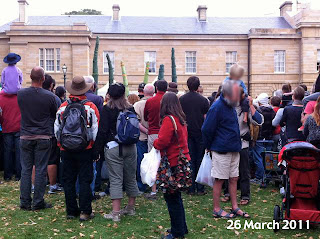 After about 15 minutes, Juniordwarf and Mum emerged from the crowd, and that was pretty much it for our dinosaur experience, except for right at the end when we caught a glimpse from behind the performance area, and he got a chance to briefly pat one of the baby dinosaurs after the show.
Afterwards, on the way home, I asked him why he didn’t like it. He said it was too noisy and there were too many people.
I shouldn’t have been surprised. He didn’t enjoy the Wiggles last week because that was too loud and too crowded.
I suppose when I think about it, I’m not really comfortable in noisy environments. I find I get quite irritated and anxious, and the same goes when I’m in crowds. I’m a classic introvert and need my alone time. Spending time with other people, which I do enjoy for short periods, and which I need to do to stop me from becoming completely withdrawn, is physically and mentally draining for me. So if this is true for me, there’s no reason why it shouldn’t be true for Juniordwarf as well. Especially for him, as he’s so small. Being surrounded by masses of adults (as well as herds of noisy kids) if you aren’t comfortable in that kind of situation must be really quite intimidating.
I guess sometimes I forget that I’ve had a lifetime of experience in being in these situations and have developed ways to manage them as best as I can. He hasn’t, and it’s all new and scary to him.
I feel a bit like I let him down, because I allowed what I wanted to do get in the way of what Juniordwarf needed. He had a miserable day, and consequently so did I.
Of course I know he needs to get exposed to new situations and different experiences so that he can develop and grow, but in hindsight, this was something he just wasn’t ready for.
I also know that sometimes he says he doesn’t want to do something, so we don’t do it, only to find after the time has passed, he wants to do it. Tantrums then follow because he realises he can’t do whatever it was he actually wanted to do. Talk about frustrating!
So what have I learned?
One. Not all kids are into dinosaurs.
Two. Juniordwarf likes crowded, noisy places about as much as I do. (I shall steer him away from a career that involves working in an open plan office.)
Three. If I suggest an event and he says he doesn’t want to go, consider whether it’s really really worth it to go – it’s hard to make that call. Today I honestly thought he’d love the dinosaurs. I didn’t take into account the crowds. It needs to be a balancing act decision I guess. Which leads to . . .
Four. There is never a right decision. If we hadn’t gone because Juniordwarf had said he didn’t want to go, I would have sat at home and been annoyed that I’d missed the dinosaurs – I would have had no idea that it wouldn’t have been fun for either of us.
Five. Perhaps my mother is right sometimes. While I was sulking and grumbling about how I might as well have stayed home and cleaned the lounge room, she said that we’d had a nice walk down by the waterfront and didn’t seem worried at all. Though she did get to see the dinosaurs . . .
Share this