I’ve been busy walking this week, so I haven’t given the Tassievore Eat Local Challenge my full attention.

I wrote a post about getting started last week,  and have been doing what I can for Week 1’s challenge, which has been to “seek out Tasmanian food and drinks . . . whether an old apple tree on the side of the road, a bottle of wine you haven’t tried before, or a recipe that has tweaked your interest”.

Funnily enough, the apple trees on the side of the road that I noticed last Sunday got pruned to within an inch of their lives during the week. Something about power lines, I believe . . .

Foraging at my house is primarily the search for eggs.

The oldest chicken decided long ago that the laying box wasn’t for her and has taken to laying in a spot in some bushes that we’ve nicknamed The Egg Butty. This comes from something Juniordwarf used to do when he was very small, and it kind of stuck. She’s had more than one Egg Butty over the years, but this is the current go-to spot.

The new chickens are gradually getting used to laying and are figuring out where to do it. One of them has even found the laying box.

The other one has decided it’s better to lay in the very back of the chook house, between the two perches, right in the chook shit from the night. She invariably knocks the perches off and we have to perform contortionist acts to get the egg and set the perches back up.

Foraging in my own back yard.

I also got 2 strawberries off my plant this week. I think that’s about 10 now. None of the other plants have fruited, so 6 plants for $10, and 10 strawberries = $1 per strawberry. Bargain! At least they aren’t fumigated with methyl bromide.

And by happy accident I discovered a self-seeded oregano plant in amongst my pennyroyal in one of the most shady parts of the yard. How it got there is anyone’s guess, but I’m not complaining.

Because I managed to kill my raspberry plants, I didn’t get any raspberries this year. So as a consolation, I’ve been drinking the raspberry cider from Two Metre Tall. It’s very good.

I had a couple of ideas of new places to go foraging, but other things got in the way and I didn’t make it.

I did pick up some Tasmanian produce from Eumarrah in Hobart, and I really like the new labelling that Hill St Grocer has for its fruit and vegetables.

This morning we went to our local market, the Big River Growers Market, which has some wonderful people with fantastic produce (and also excellent laksa). 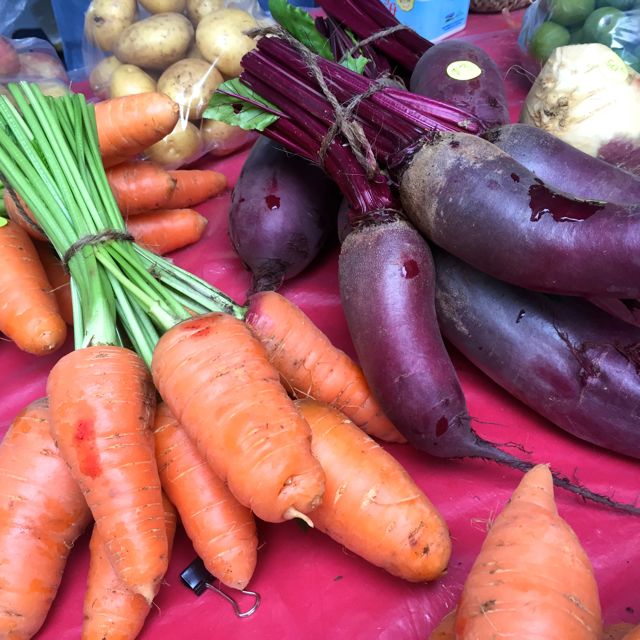 And we were walking past a new business that has recently opened, so decided to have a look in there and picked up a few different vegetables as well.

So we ended up getting a pretty good haul for the weekend.

And dinner tonight was accompanied by one of my favourite wines (which I foraged for in my fridge because I needed wine for the dinner recipe . . .)

Week 2’s challenge is to “grow your own”.

I used to be a gardening fanatic, but since we’ve been in this house – in fact probably since we had Juniordwarf – my commitment to the garden has declined and I haven’t grown anything (successfully) for several years.

Perhaps this is the time to fix that.