I’ve skipped a few book posts because this one is important to me starting out my second #steppingonthecracks challenge next week.

I had never heard of the growth mindset until recently. A few weeks ago, I saw it mentioned in three unrelated things I was reading, which made me want to find out more. (Either it was the universe telling me something, or it was an example of the Baader-Meinhof Phenomenon.) All three articles referred in particular to the work of Dr Carol Dweck. Dr Dweck is a Professor of Psychology at Stanford University, who has discovered how the power of our mindset can bring us success.

In the book Mindset: How You Can Fulfil Your Potential, and her website, Dr Dweck distinguishes between a fixed mindset and a growth mindset. 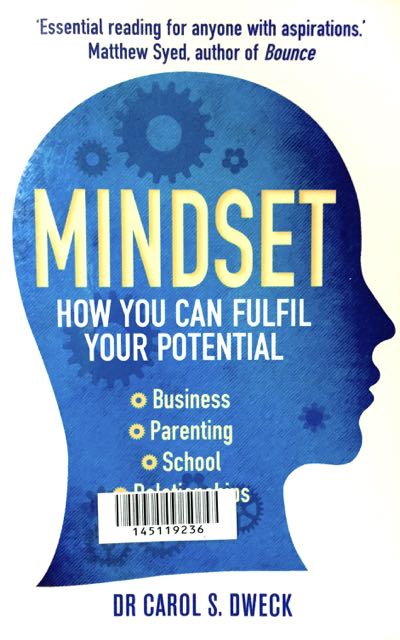 Basically, people with a fixed mindset believe that things like intelligence and talent are fixed and that success comes from talent without putting in much (or any) effort. People with a growth mindset believe they can develop their basic abilities by working hard and that brains and talent are just the starting point. They believe that to achieve success they have to put in a lot of effort.

Dr Dweck observes that “this view creates a love of learning and a resilience that is essential for great accomplishment. Virtually all great people have had these qualities.”

She says that people with a growth mindset look at their mistakes, use feedback they get and alter the strategies they are using so that they improve their performance. Unlike people with a fixed mindset, they don’t feel “esteemed by innate talent”.

After explaining what the two mindsets are, the book outlines what the implications might be for people that have these mindsets. For example, it compares school children who are praised for being smart and for achieving good results because of their intelligence or talents, and those who are praised for effort, overcoming failure and learning new skills.

Dr Dweck notes that studies have shown that the kids who are praised for intelligence (for “being smart”) develop a fixed mindset and focus on continuing to display their intelligence and have a tendency to avoid challenging tasks so that they don’t fail. They tend to blame failure on “being stupid” or on factors outside their control (the teacher, the noisy classroom). This contrasts with the kids who are praised for effort develop a growth mindset, where they see making mistakes as opportunities for learning and growth, they relish the challenges of difficult tasks and they show a high level of resilience.

She writes of John McEnroe, who was exceptionally talented, and rose to the top because of this, but who was unable to take responsibility for his own failures and rather than learn and work on his game and try to do better next time, he’d throw a tantrum and blame someone or something else.

She compares  fixed mindset people like McEnroe with someone like Michael Jordan, who went from being cut from the high school varsity team to being one of the greatest basketballers in history – and he achieved this by getting over his disappointment rather than labelling himself as hopeless, working even harder than before, a trait which he continued throughout his career.

The book cites research that found that people in sports with the growth mindset:

Dr Dweck provides similar examples of CEOs of companies, and how those with fixed mindsets put their own egos and a sense of being better than everyone else above everything, including ultimately the success of the company.

Some of the most compelling stories in the book are those about teachers tasked with teaching kids that many considered to be unteachable. These teachers instilled a growth mindset in children who had believed they were stupid and who had showed no interest in learning. The teachers refused to give up on students who were labelled as “dumb”, and didn’t believe that they had no influence on the ability of their students. One such teacher had his fifth graders reading Of Mice and Men and The Diary of Anne Frank, and his sixth graders passing algebra tests that would stump most eighth graders. Dr Dweck reports that this was “achieved in an atmosphere of affection and deep personal commitment to every student”.

I loved the story of the college student who had been late to maths class, seen some problems on the board and assumed they were the homework assignment. He found them challenging and they took him a few days of hard work to solve, but he finally did, only to find they had been previously unsolved equations!

Many of the examples, and the end results, Dr Dweck uses in the book are extreme, but I found the patterns of behaviour were easy for me to identify with, even if the results weren’t. I’m no John McEnroe or (Enron CEO) Ken Lay, but I recognised some of the elements of their mindsets outlined in the book.

On a level closer to home, I recognised myself in a lot of the statements that the kids with fixed mindsets made throughout the book, and some of the things those kids did when things got tough at school are pretty much what I did.

I also found the chapter on parenting especially enlightening in terms of the messages I might be sending by the type of praise I give and the things I praise Kramstable for. It’s something I’ve been paying a lot of attention to ever since I read this article on Dr Dweck’s website.

This book was a real eye opener for me, and I think it fits in perfectly with the theme of my #steepingonthecracks project – that I don’t have to be defined by my beliefs about what I can or can’t do.

But more of that in the next post. All I will say for now is that this book has made me change how I’m going to start my project. It has introduced me to one of the most powerful concepts I have ever heard of and made me determined not to be the person who has “She had potential” on their headstone.

where has the week gone?