322 days ago, on 31 December 2017,  I posted a photo of kunanyi from near the bottom of the university with the caption, “One day, Mountain, I will walk to your summit”. 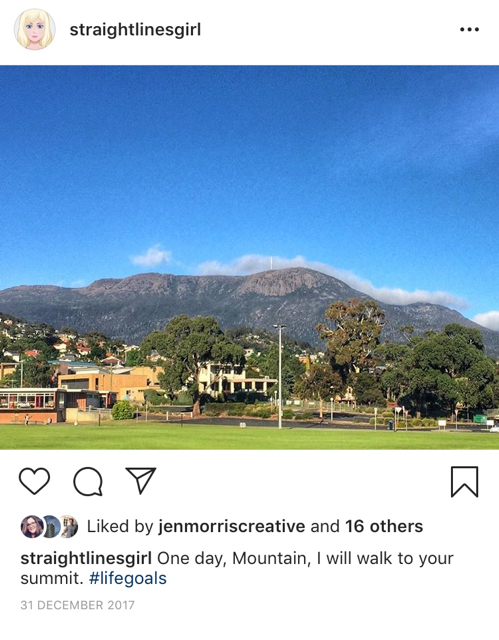 I didn’t specifically have the Point to Pinnacle in mind when I posted that photo and I didn’t have a time frame for doing it. It was just in the back of my mind as a “someday” thing.

When I signed up for the Point to Pinnacle in August I had every intention of following a training plan leading up to the event, doing lots of hill walks and feeling completely prepared to do the walk. I didn’t stick to the plan, I didn’t do lots of hill walks and, in the past month, have done very few morning walks at all. For someone who normally walks every day, I’ve found my lack of motivation very unusual and out of character, especially leading up to a 21.1 km walk up a 1270 metre high mountain.

So I didn’t feel prepared and was not-so-secretly worried that I wasn’t going to make it. There’s a time limit of 4 hours 40 minutes for the walk and I wasn’t at all confident about my hill-readiness. However, I’d signed up, I’d told people I was doing it and I’d found someone I knew a couple of days ago who said she’d walk with me. I was going ahead with it.

When I got to the casino, I could see the top of kunanyi was shrouded in mist and it seemed so far away. How was I going to do this? I’ve wondered this every time I’ve walked along Sandy Bay Road and looked up there. How is this possible?

The reported temperature on the summit was “feels like minus three”. I packed a jacket and gloves in my gear bag, which the bus takes to the top so the participants don’t have to carry stuff they don’t need on the walk (or run).

I caught up with my friend along Sandy Bay Road and we kept up a steady pace as we made our way to Davey Street. I felt a bit (not) sorry for the cars who hadn’t gotten to the Southern Outlet before it closed and were banking up along the road. I have no idea what happens in these situations; whether they let people through when there are gaps in the packs or if the cars just have to stay there until the roads reopen.

The walk was just as I remembered it from two months ago but without the cars and the fear that I could be run off the road at any time by a driver who wasn’t paying attention. This was definitely the way to do it! Allowing for the congestion at the start, which slows things down a bit, my revised goal was to get to the turnoff to kunanyi in one hour 45. We did the 9.7 km in one hour 48, leaving two hours 52 to do the final 11.4 km. We were both confident of making it, but the hill was the unknown. I knew I could easily walk 11 km in three hours. On the flat. But the lack of hill training was scaring me.

There was only one way to find out!

Not far up the road, we were informed we’d passed the half-way point, and soon came to a 10km sign. I initially thought it meant we’d walked 10 km, which made no sense if we’d already passed half-way, but my friend pointed out that this was actually 10 km to go. Ohhhhh. I’m not at my brightest in the morning. We were walking through the mist we could see from the bottom and it kept it very cool and was nice conditions for walking in.

I was grateful for the bathrooms at the Springs because I needed a break and told my friend to keep going rather than wait and I’d catch her up because her pace was a bit slower than mine. I power marched up the hill to catch her. She’d said a couple of times that if I wanted to go on ahead to go because she was slower. I felt bad leaving but she said she didn’t mind and I hadn’t actually factored doing this with anyone else when I was planning, so I said if that was okay I’d see her at the top. And continued my power march.

Six km to go and it was nearly 10.00. Three hours in, one hour 40 to go. At my normal pace, I would easily do six km in an hour. On the flat. For some reason, my lack-of-sleep addled brain thought that this meant I should be able to cover a kilometre in six minutes and I was expecting the five km sign in six minutes. I was very put out when it took just over ten. I finally clicked to the actual rate I was walking and set myself a goal of the final five km 50 minutes.  Every time I saw one of the red signs I was a little bit more relieved. The mist had gone in one spot and we were walking in bright sunshine for a brief period, but that was short-lived and the rest of the ascent was in mist. Much better for walking.

I was a bit horrified at thinking I was nearly there, and then seeing the last big turn in the road to the pinnacle and OMG people walking up there!

Finally, there was one km to go and the end was in sight. I got a bit muddled as to where the finish line was and I was trying to take photos as well as look glamorous for the race photographer and I’m sure the photo of me crossing the line will be me trying to work out why my video wasn’t working. Ha!

It was great crossing the finish line with all the people standing there cheering and, because the race bibs have your name on them, they’re calling out encouragement especially for you! What a way to end. I had the biggest smile on my face and was so happy to have made it to the top. I didn’t feel like I was going to collapse in a heap like I’d expected! I felt like it had been a nice, somewhat more strenuous but not impossibly so, walk than some of my usual Sunday walks. It certainly hadn’t justified the fear I’d felt before the event. My final time was four hours, two minutes, which, if you subtract the toilet break, would have been under than four hours.

I never thought I would do it in that time and I have a niggling thought that maybe, just maybe, I might want to go back and do it again next year so I can break the four hours.

I have 12 months to talk myself out of it!

On the way back down on the bus with my friend, who also made it in the time limit, yay!, we commented on how it seemed so unreal that we had walked up there. Back at the casino, looking up where we had been, it was like it had never happened.

I suspect my legs will tell a different story tomorrow.